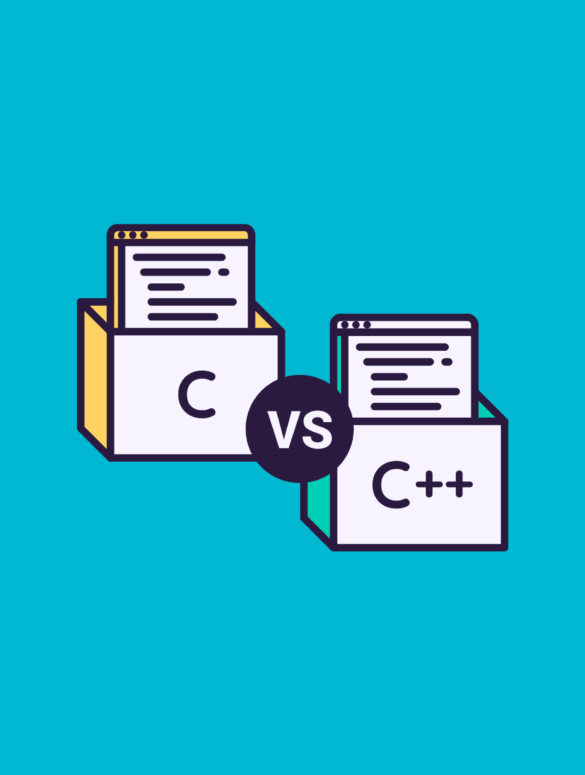 C VS C++: A Side By Side Comparison

When you train to become a software tester or already work in the field, you want to look at C vs C++ side by side for a better understanding of each programming language. Doing this helps you learn to work and differentiate between the two.

C and C++ are two of the oldest coding languages still in use today. C++ is derived from C but tends to be more efficient and productive. Both programming languages have their pros and cons. Knowing the difference between C and C++ is important when you are in the QA testing field.

C is the foundation of modern programming language. It was first used in 1972 by Dennis Ritchie when he worked at AT&T Bell Labs and was originally conceived to make utilities run on a platform called Unix. Its use exploded and it is now the most widely utilized programming language anywhere.

What is C used for?

Because C is still a choice in programming languages, it was perfect in OS development. It gave users direct control over all aspects of the computer. C is the language of choice for legacy programs and anything you learn with C makes all other programming languages easier to grasp. sing other programs such as Matlab is easier if you know C first.

Programs created in C run on their own so you don’t need access to C itself once it is written. Its programs are transferable and do not need source code. Because C was used so often, you should learn to read C as it will come up again and again in the QA line of work.

C can be used for high and low-level programming, from scripting drivers to the high levels of scripting software applications, virtual functions, and machine code. Complex programs can be broken down and it allows data to move easily through these various functions. It can be used for games, graphics, and apps needing calculation, etc.

C++ is C’s talented offspring. It was created by Bjarne Stroustrup in 1985.

He, too, worked at AT&T Bell Labs and wanted to improve the C language to make it more efficient and flexible. C++ moves into an area that gives support to object-oriented programming. It gives low-level abstraction and uses manual memory management similar to C. It also allows app development on many platforms and is very similar to C but upgraded. It continues to influence other languages such as C#, Python, and Java, too.

C++ is used for applications that want good features and data security. It is great for apps with a graphic user interface such as Adobe Premiere and its fast language makes it great for games as well as animation. Web browsers such as Google Chrome and Firefox also use C++ and it’s flexible enough for developing database software to help companies save time and money. This code is also great for media players and standard library video file management. Along with all these applications comes operating systems and scanning programs. All of these applications use C++ because of its speed and flexibility. The list of what C++ can be used for is extensive.

C vs C++: A Side-By-Side Comparison

C vs C++ have both similarities and differences when compared side-by-side. While C++ stems from the C original language, the differences appear in its updated abilities.

1. C is a procedural language and C++ is object-oriented.

This difference highlights a significant variance in programming style. Whereas C cannot be object-oriented, C++ does have aspects that are procedural thus giving it more flexibility than C. C++ is considered a hybrid, unlike C.

C does not use Namespace at all. C++ uses it to organize code into logical groups and prevent collisions. It makes programming easier and quicker.

3. C does not offer direct support for error handling.

4. C has separate and free entities that C++ does not use.

5. C is the founding programming language but C++ is the higher-level language.

While C is the foundation of the language, C++ is considered a superset of the original C. C++ is able to run C code but, in contrast, C usually can’t run C++ code.

No. It is procedural.

It is not hard to learn but difficult to put into practice as it uses manual memory management.

If you are looking for more info on QA testing tips and other good resources, sign up to get The QA Newsletter.

You’ll get updates about new podcast episodes and fresh articles with tips and tricks of the software testing industry.