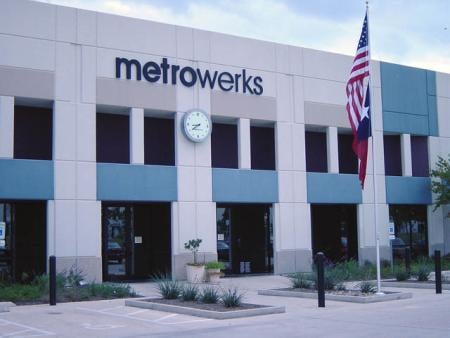 After about two decades in business and a change of ownership, the company’s owners announced they were retiring the name Metrowerks. Today, attempting to access Metrowerks.com, shows that the site is no longer publishing.

What has happened to the company that did so well that it attracted the attention of Motorola? We took some time to find out. We follow the company’s history, look at its flagship product, CodeWarrior, the tools it created, and the broader impact of these tools.

Founded by Greg Galanos in 1985, Metrowerks was initially known as Metropolis Computer Networks. It looks like the name Metrowerks is a shortening of its original name. It was headquartered in Hudson, Quebec, Canada (Source).

By 1996, the company was reporting that its revenue from CodeWarrior was $10.6 million, and almost doubling to $18.3 million in 1997. With this type of success, in July 1996, Metrowerks’ initial public offering began trading on the NASDAQ national market under the symbol MTWKF (Source).

CodeWarrior was an integrated development environment (IDE) published by NXP Semiconductors. An IDE is a software editing tool that boosts programmer productivity by bringing together everyday elements such as editing, compiling, and software testing tools into a single application. CodeWarrior was among the first developments on Macintosh to support Motorola 68K and the new PowerPC (PPC) (Source).

An article published by the California University of Pennsylvania provides an overview of CodeWarrior. It notes that “the neat thing about CodeWarrior is that once you learn it for anyone target, you essentially know how to use it for any other target.” The piece then goes on to list some of the CodeWarrior features:

In 1992, the advent of the PowerPC processor triggered Metrowerks to focus on creating development tools for Macintosh computers. The company shipped CodeWarrior’s inaugural commercial release at Apple’s Worldwide Developer’s Conference in May 1994 (Source).

The initial release of CodeWarrior was a big success. The company received credit for helping Apple to navigate a difficult period of moving over to a new processor (Source).

As it developed through different versions after 2000, CodeWarrior came along with a complete set of instructive online books. One of these books included Barry Boone and Dave Mark’s Learn Java on the Macintosh, which was considered an excellent resource for many projects (Source).

In 1994, Metrowerks opened a research and development office in Austin, Texas. The move was influenced by the need to be closer to companies like IBM and Motorola that used to manufacture the new PowerPC chips back then. Later on, the company would move its headquarters to Austin, along with its founder, Galanos, and the chairman/CEO, Jean Belanger (Source).

In 1999, Motorola’s Semiconductor Products Sector (SPS) purchased Metrowerks for approximately $95 million. As part of the deal, Belanger (then company chairman) and Galanos, who held about a quarter of the company’s shares, agreed to surrender them in exchange for cash (Source).

With the acquisition of Metrowerks by Motorola Inc., Motorola agreed with Metrowerks to include CodeWarrior IDE in Motorola’s free SoftwareDeveloper Kit (SDK) on CD-ROM, from the company’s iDEN Subscriber Group (Source). The kit included different types of software testing for applications, a developer support program, and e-commerce backend processing, among others.

According to Metrowerks, when they created CodeWarrior in 1991, their “long-term goal was to build a large, profitable software company.” The company notes that it was aware that this could only be done by developing “tools beyond our first product, CodeWarrior for Macintosh” (Source).

What then Happened to Metrowerks.com?

In 2003, Motorola turned SPS into a separate company. The company was called Freescale Semiconductor. This is where Metrowerks ended up (Source).

In July 2005, Metrowerks announced that their forthcoming release of CodeWarrior 10 would be the last for Mac. This happened in an environment where Apple was heavily investing in its own development tools. This marginalized CodeWarrior, leaving it with no choice but to exit the Apple platform (Source).

Towards the end of 2005, Freescale retired the name Metrowerks. With the name gone, there was no need for Metrowerks.com anymore. However, Freescale continued to develop CodeWarrior and other developer technologies as part of the Freescale’s Developer Technology Organization.